Ohhh Emmm Geee, has it really been 2 months since I last wrote a blog post???! It seems hard to believe, but yeah it has been 2 months and 2 days since I sat down to share with you the adventurous, sometimes mundane, details of my existence. Life has been good, very, very good. My New Year resolution to make this my year of yes Three Weeks and A Day has led to one of the best Summers I have had in a while.
I have said yes to every invitation to hang out, even if I didn’t feel like it, I made myself do all kinds of stuff I wasn’t in the mood for, like hitting the gym, 5 to 6 days a week, even if it was pouring rain outside; and when my son came to me, out of the blue, with what I initially thought of as a ludicrous idea of wanting to pursue a modeling career, instead of my knee-jerk reaction of, “That’s crazy, go focus on your academics instead.” I, instead, said, “Sure, why not?” and immediately started the groundwork needed to get him started in the industry.

All that yes-ing has been taking away from the time needed to do other things, like my writing, with only 24 hours in the day, obviously, something will fall through the cracks. The important thing is that I didn’t abandon my blog, even though it as taken me 2 months to sit down and write again. The good thing is that the yes-ing has created new stories for me to share and that, in my opinion, is always a plus.

My fifteen-year-old, I have written about him several times, MILF, recently decided that he wants to put his 6’3 height to use and model. I was a bit taken aback since he has never ever expressed any desire to do anything like that before. First, I asked, “Why?” and he said,”It’s something I just want to try.” He maintains that if he is successful then he can make some money to help fund his college education. Of course, he had me at “college education.” So, I did a little bit of internet research and spoke to a few people, then hired my wedding photographer turned friend, Carmen, to do a photoshoot of my son and the results were fantastic. Turns out my boy does have some model appeal. He was a natural in front of the camera and even Carmen, who has been photographing people professionally all her adult life, was amazed at the ease in which Blake worked and his level of comfort and confidence in front of the camera.

Not sure where this desire of his will go, or if it will even go anywhere but I am doing my part as his mother and encouraging this pursuit. If it works, then fantastic, if nothing comes of it then I hope his disappointment, if any, will be short-lived. I am just happy that he decided on his own, without any input from me, to chase a dream.

The Summer of yes has also brought with it a myriad of social activities – too much hanging out, eating and drinking, has me gaining back 4 of the total 27 pounds I had lost before the Summer rolled around. Notwithstanding my gallant efforts to lose those nagging 4 pounds and to continue my weight loss journey towards my goal weight, which is now 12 pounds away, I just can’t seem to say no to the dinner and drinks invitations. I am trying though and I have not given up on the hope that I will get to my goal weight before the year ends.

I love live music and performances so I have made it a Summer of concerts and shows. Usually, I am a bit hesitant to shell out my hard-earned money on some of these overpriced concert tickets but this Summer I treated myself to a few artists I have always wanted to see perform live. I had the pleasure of seeing JLo do her thing, Aziz Ansari (a comedian), Billy Idol and Bryan Adams, who were on the same ticket, and most recently Lenny Kravitz, who I swooned over the entire time.

At the beginning of the JLo concert, right in the middle of Jennifer’s third or fourth song, the lights in Madison Square Garden went out. When her microphone suddenly went dead and the lights went off, I thought, “Dear God, I hope this isn’t a terrorist attack.” However, before my mind had time to go to town with that idea, the back-up generators at MSG kicked on and we were informed that we had to evacuate the arena. By then, my girlfriend, who was seated next to me, got a text from her husband informing her that the entire West Side of Manhattan was experiencing a power outage. Even though I was disappointed that the concert had to end abruptly I was relieved that it was only a blackout.

I was among the 25,000 attendees, who had to be evacuated from Madison Square Garden when the lights went out at the beginning of the JLo concert on July 13th, but I was only one of a few, who was interviewed by the local news about their blackout experience. 😁

I am yet to see the clip of my 10-second interview but a few people reached out to me and told me they saw it. My immediate question to each person was, “Did I make a complete fool of myself?” After all, I did have a couple of drinks earlier that night, but the general consensus was that I sounded “intelligent” and most importantly I looked “great”. 😉 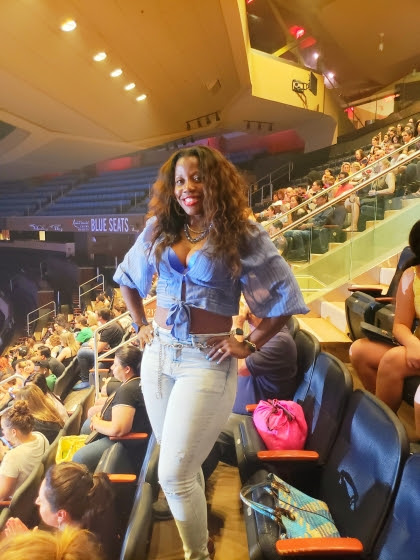 My Summer of yes has also brought with it some physical changes – not major changes but subtle changes – like when my hairstylist of the past 7 years suggested I try a different look this Summer. I hesitated at first but then reminded myself that change is good and told her to go for it.

When she first spun me around in her chair, after creating my new hairstyle, I liked the look but all the confidence I had leaving the salon was sucked out of me when I walked through my front door and my husband took one look at me and exclaimed, “Oh no…What did you do?”

“Not really!” was the honest reply.

So funny how the opinions of others, that we value, can have us doubting ourselves. I kept my “new do” for only 2 weeks, even though I had planned to rock it for the remainder of the Summer. Truth is, my husband is a simple man, who pretty much likes everything about me, nothing that I do really bothers him, but he truly wasn’t feeling my new look so I got rid of it much quicker than I had planned to and went back to the tried and true and that made him a happy man.

Full frontal of the new do.

Perhaps the best experience of Summer 2019, was watching my former paralegal turned dear friend, Kerese, give birth to her first child. When I arrived at the hospital she was already in labor. Kerese had asked me beforehand to photograph the experience, maybe even make a video and I said, “Yes, of course!” I assured her that if hospital personnel would allow me into the delivery room it was a done deal. Well, it must have been my lucky day since no questions were asked when I waltzed into the delivery room, camera in hand ready to document the birth of my God-daughter.

What I wasn’t prepared for was the trauma of it all. I had never seen anyone give birth in my entire life, and despite having given birth myself, it’s a totally different experience when you’re on the other side watching it unfold with every breathless push by the Mom in labor. Whoa!!!!

It was brutal! I was in actual tears when she started crowning. It wasn’t an easy delivery, because my friend was too tired to push after a while, but she did it though. It took longer than anticipated but she gave everything she got and through lots of tears, screaming and scratching at her husband’s arms, my friend gave birth to her precious baby girl, Alexandria. It was an amazing, traumatic, breathtaking, bloody, magnificent, stomach-churning experience, all rolled into one, and I am still blown away by the miracle of it all.

There you have it, folks, I didn’t abandon my blog, I was too busy “doing”, “being” and generally just “living”. My unintentional hiatus brought with it a myriad of stories that I look forward to sharing even more of in future blog posts.

Thanks for sticking around and waiting for me to come back, and an even bigger thank you for reading. If you’ve enjoyed this post, don’t be shy, go ahead and hit the “like” button and leave a comment below.

If you haven’t yet subscribed to my blog, http://www.racquelwrites.com, please do so. I promise you won’t be disappointed.

See my "About me" page. View all posts by Racquel